February 02, 2020
Let’s be honest!  There are days we are not full of pure joy.  Some days are just hard and you get hit with one thing after another.

The longer we’ve been in ministry, and particularly on the foreign mission field, the more we’ve become aware of the potential patterns of spiritual warfare.  “Your enemy the devil prowls around like a roaring lion looking for someone to devour.”  (1 Pet. 5:8 ESV)

We just finished up an amazing time of prayer at our Madagascar Prayer Retreat.  Thank you to so many who were praying for the details of the trip to come together.  We prayed, we worshipped, we fellowshipped, we learned more about Malagasy culture and we played.  God more deeply knit our hearts together and united our vision with his vision.  The kids had a blast as they spent time worshipping, studying Bible stories, praying and playing.  It truly was a sweet, sweet time!

We had a few hiccups prior to the retreat.  One family was unable to get their passports and visas in enough time to attend.  We really missed them, but were able to catch up all together the day the retreat ended.  We were unable to find a volunteer team to come and work with the kids, but we had two HandsOn volunteers that had just arrived a week before, plus a few Malagasy girls and some of our support service volunteers that were attending the meeting with us that did a phenomenal job loving the kids!  And they would all tell you that we have phenomenal kids!

During the retreat, sickness was minimal.  A few missionaries were getting over sickness, including Adam, but during the retreat itself everyone was able to participate.

Since the retreat, we have had multiple incidents.  One after another, from house invasions, to car trouble, and serious sickness and injuries.  As we brace ourselves for what’s next, we lean in on James’ exhortation, “Count it all joy, my brothers, when you meet trials of various kinds, for you know that the testing of your faith produces steadfastness. And let steadfastness have its full effect, that you may be perfect and complete, lacking in nothing.” (James 1:2 ESV)

*The prayer retreat was a huge success.  God met us there and we are all more refreshed and ready to get back to work.

*Those of you who have given to our special gifts/ministry helped this prayer retreat to happen!  Thank you so much!

*We have many exciting upcoming activities: kids sports league in Fort Dauphin, bush trips to encourage believers, visits with family, many co-workers learning language and culture and more.

*For the trials of various kinds to slow in frequency and for everyone affected to lean in more on Jesus.

*For the details of the many exciting activities to fall into place. 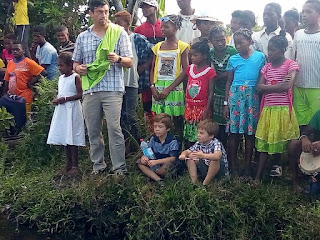 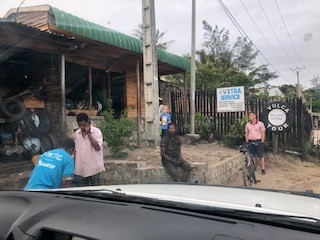 Getting a flat fixed in Fort Dauphin 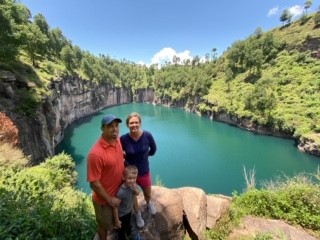 Praying around Lac Tritriva outside of Antsirabe 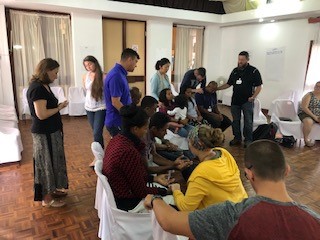 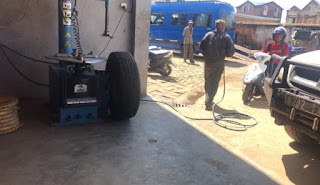 Getting a flat fixed in Antsirabe 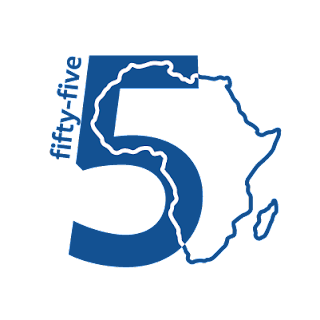 Our leadership in Sub-Saharan Africa has set a five-year goal of engaging 55 unreached unengaged people groups (UUPGs) with a population of over 100,000 people. In order to reach this goal, which we are calling “55 in 5,” we must first commit to praying for and learning about these people groups. A people group is unreached and unengaged because Christ is largely unknown and the church is insufficient to make Him known in its broader population without outside help. I am asking you to join with us in praying for these people groups. Each month for the rest of the year, I will send you five priority people groups to pray for that month.
Will you commit to praying with me for these people?

*This month I am only including one, but there will be 5 each month from now on.*

The Antesaka people live along a remote stretch of the eastern coast of Madagascar. They originated from Indonesia and intermarried with others from the Middle East, South and East Asia, and Europe. Antesaka villages lay beyond the reach of Madagascar’s broken roads and riverbanks — travel by water or foot is required.
Although many among the Antesaka attend church regularly and consider themselves Christians, they are deeply influenced by traditional African religions and animism, as well as neo-Pentecostalism and the prosperity gospel. Most of them are living in darkness and under pressure to remain in ancestral worship.
Pray
· for Christ’s light to shine among the Antesaka people so they will no longer walk in darkness but in the hope that comes through Jesus Christ.
· for the Spirit to work through local Christians and missionaries to reveal Christ clearly to the Antesaka people.
· that the Antesaka will hear the truth of God’s Word and will be compelled to abandon everything for Him and His name’s sake.
“When Jesus spoke again to the people, he said, ‘I am the light of the world. Whoever follows me will never walk in darkness but will have the light of life.’” (John 8:12 NIV)