Held Together by the Body

Since we returned to Madagascar in March from our last stateside assignment, we have been on the go.  We’ve hosted amazing teams, welcomed back and said farewell again to our daughters, gone on encouraging, helpful trips around the island visiting colleagues and national brothers and sisters, and to company-wide meetings where we received excellent training and were built up in the Body as we worshipped and studied in our heart language.   It’s been a bit of a whirlwind, but God is on the move.

We’ve sought to reunite with leaders serving in the Androy and Anosy regions with the most fruitful opportunity being the week-long seminary training back in June.  We haven’t made it out to visit all these leaders but are back at being in closer contact and planning upcoming trainings to refocus and recommit to the task at hand.  At least two of our attempted trips were derailed due to car-trouble.  Pray we can get our car back in tip top-shape.  We’ve had the car in the shop too often!

As it is with any spiritual growth, there are growing pains.  We’ve had disappointments as leaders have fallen away but we’ve also had many young men called to ministry and head off for further Bible training.  Pray as the desire for higher education grows that God will also provide the means for the students to go.

In the past month, we’ve had colleagues relocate, arrive and return to the island.  A new position was created to give a “birds-eye” view of the island and connect more regularly with our partnering Malagasy conventions.  Pray for the Sprankle’s as they settle into life in Antananarivo and mobilize more leaders to win the island for Christ.   The Lee family completed their missions training and arrived in Madagascar to serve as City Servant in Antananarivo.  Pray for their kids to get settled in the British school and for David and Zoey as they immerse themselves in full-time language study.  The Baker family returned to Toliara after 6 months away.   Pray for them as they settle back in and prepare to welcome their second born into the world in December.

As the Lord moves in mighty ways, Satan works hard to disrupt and cause chaos in any way possible.  This is true for us, our colleagues and our Malagasy brothers and sisters.  As we seek to be who he’s called us to be and use the various gifting's he's equipped us with, please pray Ephesians 4:14-16,


“Then we will no longer be infants, tossed back and forth by the


waves, and blown here and there by every wind of teaching


and by the cunning and craftiness of people in their deceitful


scheming.  Instead, speaking the truth in love we will grow to


become in every respect the mature body of him who is the head,


that is, Christ.  From him the whole body, joined and held together


by every supporting ligament, grows and builds itself up in love,


as each part does its work.”

May the Body be united as we seek to love God and love one another in this journey to collectively reach the unreached in Madagascar.

*Adam had safe travels and made it home after multiple meetings around the island and in South Africa to continue to progress the work as he was away for 3 weeks.

*Six new churches from the Androy/Anosy regions in the South were voted into the CEIM Convention (one of our Baptistic faith Malagasy convention partners).

*River is learning French and doing well at school.

*Baylee made the JV basketball team at RVA, boarding school, and is thriving in her new environment as a Freshman in high school.

*Phoebe and Emma are continuing to learn how to do life as a young adult.  They are doing well and working very hard in their courses at University.

*Suzie’s family found half-price tickets to Madagascar and some of them will be coming to visit in March!!!

*Grace and wisdom amid trials, challenges and spiritual warfare.

*Missions Consultation meeting Oct 18-22 with the FBBM (Fiangonana Batista Biblika Madagascar) Convention as they look to form a mission’s sending organization within their convention.

*Favor in logistics as the government has changed the process of obtaining visas into Madagascar.

*For all our colleagues, pray for our vehicles to be repaired well and not have to return regularly to the garage for repairs. 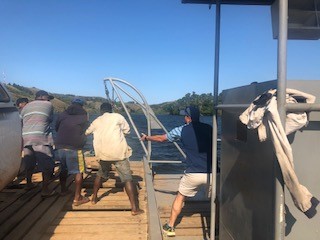 Adam helped pull the ferry across the river on our way to Manakara
so we could get to the other side. 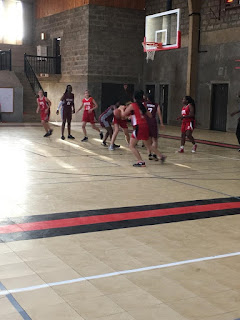 We don't get to be there to watch Baylee play basketball,
but we're thankful for friends who pass pictures along. 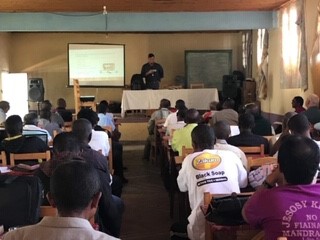 Adam was able to attend and share at the CEIM Convention of how we can continue to partner.
Six churches from the South were voted in to the convention. 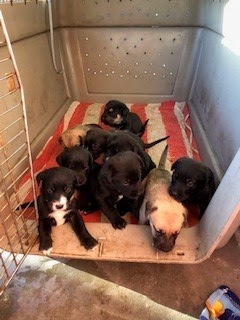 Our puppies are a month old now.
We believe all 9 have a good home to go to soon. 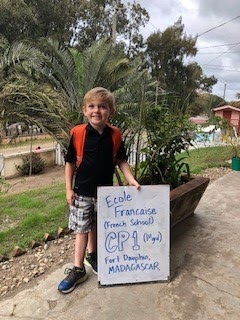 River loves to learn and is enjoying school where he's learning in French.