Almost four years ago, a group of 12 volunteers raised a couple thousand dollars each in order to come and pray over a vast area of Southern Madagascar.  They yearned to speak the truth of the Gospel, but a majority of the 40 hours they spent on this trip was traversing bumpy, harsh, taxing curves, rocks and sand whilst praying.  Upon arrival in a town where they could rest, they would struggle out of the vehicle, regaining mobility in their aching bodies and attempt to recoup in order to do it for another 10 hours the next day.  Amidst the discomfort, the group would pray in each village along the main road of Androy (South Madagascar):  Tranoroa, Beloha, Tsihombe, & Ambovombe.  Turning back after the third day of travels, they faced deep, wet mud holes.  The rain was a miracle because Androy is a desert and doesn't get much rain.  In each village the volunteers had prayed in as they passed by, it had rained.  The Antandroy people were amazed and excited.  They knew there was something different about our group.  Now, there is a group of believers meeting in each of these villages.  Two of these villages have churches that have been planted.  Here's a picture of a few of the pastors in the area: 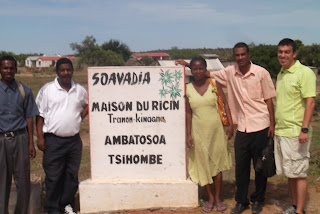 The underlying component to these new believers, new groups and new churches was prayer!


Prayer has continued to be the power behind the Holy Spirit moving among the Antandroy people.


If you would commit to praying alongside us for the Antandroy people, let us hear from you!  I am fasting lunch on Tuesday’s.  If you are so led, fast alongside me and let’s see how the Lord opens the floodgates and brings the nation of Madagascar to Himself.  Also, let us know specific ways we can be praying for you!
Praises:
*New believers are being baptized and evangelizing among surrounding villages
*We're enjoying being all together as a family this month while Phoebe and Emma are on break from school.
*We enjoyed a time of worship and preaching at our meeting we just finished.
Prayer Requests:
*Sweet time together and in doing ministry together as a family.
*We would be faithful in sharing and discipling new believers.
*We'll be having a prayer retreat for our national partners and their wives next week.
*Diana- a co-missionary coming from Ecuador to work with us.
*Preparations for short term teams coming in the next few months.