We have just finished up an amazing time in Ambovombe sharing the Word of God, helping people prepare for baptism and encouraging the local believers.  We learned a lot about the city and a lot about how the Lord is at work in Androy land.  We also were able to see the Lord’s hand of blessing upon the local church there and their pastor Jean De Dieux.  We are so impressed with his work ethic and desire to evangelize, disciple, equip and encourage people there.   With all that said here comes the amazing part of it all.


Many of you might remember back last September we made our first visit to Ambovombe and we had an accident as we were leaving the town.  There was a young man who rode his bicycle out in front of our car and we hit him.  We hit him pretty hard that day and we must say we thought we killed the young man.  We will never forget that day, moment and the events that followed.  Adam will never forget the look on this young man’s face as he hit the car and then went flying through the air until he hit the ground a few yards away from our car.  It was terrifying and an event we don’t ever desire to live through again.  Little did we know that the Lord had an amazing will for our lives and this young mans’ (Dada) life.
So after we hit Dada we took him to the hospital and made sure he was okay, we paid for his stay, medicines and helped them get a new bike.  We also prayed with them and used it as an opportunity to share God’s love.  We had the privilege of visiting with all of them a couple of days later with our pastor friends (Rene and Jean de Dieux) and once again shared the story of Jesus with them all.  That night Dada came to Fort Dauphin with us and we dropped him off not knowing of what would become of him. 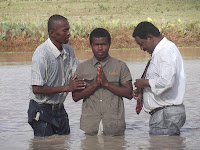 The Lord was working on Dada's heart and he heard the Lord calling him to salvation.  Dada repented of his sins and began to follow the Lord Jesus Christ with all of his heart, soul, mind and strength.  He began to host a Bible Study with Pastor Jean De Dieux at his home in Ambovombe and he has continually been growing in his walk with the Lord.  We have heard reports over the past months about him and how the Lord has been at work in and through him.  We have just praised the Lord for all of this good news and then today we had the privilege of seeing him again.  He came in with his normal quiet attitude but we could see radiance in his smile.  None of us had to say much it was clear that we were all praising the Lord within our souls.
Today was baptism day in Ambovombe.  It is the very first baptism for this young church (Year old) and we were all excited.  Yes, you are right Dada was one of the 12 that got baptized.  We were there at the beginning afraid that this young man had lost his life in a tragic accident only to find the Father was at work desiring to do something even greater.  The Father took this young man from death to life.  This young man today displayed what the Lord has done in his life to the whole world.  He followed in faithful obedience to the Lord in believers’ baptism.  He demonstrated to us all that he has died to the old life and been buried only to be raised into new life in Christ Jesus.  We give the Lord all of the Glory and all of the praise for what He alone has done!!
Next up for Dada is to continue to grow in his walk with the Lord.  He feels called to ministry and he is being discipled there at the church in Ambovombe.  He is working trying to save money so that one day he will be able to go and finish his education.  His desire is to go to the discipleship school in Toliara.  Until that day we are going to work with him and continue to train him up in the Lord.  We ask you to join us in praying for him and the eleven others that were baptized today as well.